The aim of the present project is to validate a novel music-based cognitive test and extend its applicability across different countries. Mangiacotti designed and tested the Music Cognitive Test (MCT) with an Italian sample and we are now collecting a large sample in the UK. MCT was designed specifically for music therapists, in order to allow them to independently monitor the effectiveness of music therapy activities on various cognitive functions, thus facilitating communication with other healthcare professionals. Currently, there are only a limited number of quantitative tools that can be used by music therapists, and these tests are psychometrically unstable as they draw upon unrefined tasks and scoring protocols, hence providing therapists with merely generic information about cognitive domains. This is, in turn, a serious limitation for effective monitoring of the improvements in clients’ cognitive abilities, and hinders any necessary adjustments in the therapy programme.

The use of music intervention with people that have cognitive impairment may not only be a useful activity to improve quality of life, but also be more enjoyable compared to “paper and pencil” or computerized tasks that are commonly used in neurocognitive rehabilitation (Biasutti, Mangiacotti, 2018, under review). This has implications for the practice of music therapy and for the role of music therapists who work in the field of cognitive decline. However, such activities and their outcomes require appropriate assessment, especially in the early stages of cognitive decline or impairment, in order to optimise the intervention benefits and to promote this type of intervention on a larger scale.

Scarcity of assessment measurements in music therapy has been noted (Isenberg-Grzeda, 1988; Maranto, 1993;York 1994; Lipe, 1995), in particular regarding the assessment of cognitive functions that are stimulated by music therapy programs. Although several articles have been published on music therapy assessment in geriatric contexts (Aldrige, 1993; York, 1994; Hintz, 2000; McDermott, Orrell & Ridder, 2015), these studies are based on small samples and have not made an impact in the music therapy literature (Lipe, 2015). Some music therapy assessment tools that can be used to evaluate/map cognitive functions exist, but most of them are focused on specific parameters: music preferences (Gibbons, 1977; Jonas, 1991), functional singing range in elderly people (Greenwld & Salzberg, 1979), and awareness in Disorders of Consciousness (Magee et al., 2014). Moreover, they usually consider the ability level in music performance (Aldridge, 1993; York, 1994; Hinz, 2000; Lipe & York, 2007), providing purely a global measure of cognitive function, without an appropriate evaluation of specific cognitive components, such as memory and executive function, or the client’s state of mind. In many cases they even just focus on observational outcomes, which may be affected by therapist personal evaluations (McDermott et al., 2014). In general, the lack of a rigorous quantitative approach in this type of research limits the music therapist’s ability to understand which specific cognitive functions are impaired, and to suitably adapt the therapy (Lipe & York, 2007).

In sum, most of the cognitive tests available to music therapists are seriously limited due to one or more of the following reasons: they are based on limited samples, are psychometrically unstable, present unrefined tasks and scoring protocols, or they require different musical instruments (maracas, drums, etc.) in the administration, making difficult their applicability in everyday practice (Saad, 2017).

Similarly to the Mini Mental State Examination (MMSE – Folstein et al., 1975), the Montreal Cognitive Assessment (MOCA – Nasreddine et al., 2005), and the Severe Impairment Battery (SIB – Panisset et al., 1994), which are standard assessment tools for cognitive decline, all tasks in the MCT are designed to investigate specific cognitive functions that are known to be stimulated by musical activities (space-time orientation, praxia, discrimination skills, memory for recent events, verbal comprehension, planning, verbal fluency, sound orientation, autobiographical memory, semantic memory, verbal production, comprehension, and attention). However, in contrast to the above-mentioned cognitive tests, all items in MCT are based on musical tasks, which are specifically targeting these cognitive functions.

Results of the Italian sample n=40

The results highlighted how MCT provides an overview of the cognitive function state of the client, allowing the music therapist to potentially identify specific areas of decline and adjust the therapy programme accordingly.

Following these encouraging results, the MCT has been revised and adjusted for validation in English, and in the present study we aim to increase the sample (n=400), thus enhancing the generalizability, validity and reliability of the test, in order to extend its applicability to the English-speaking population. 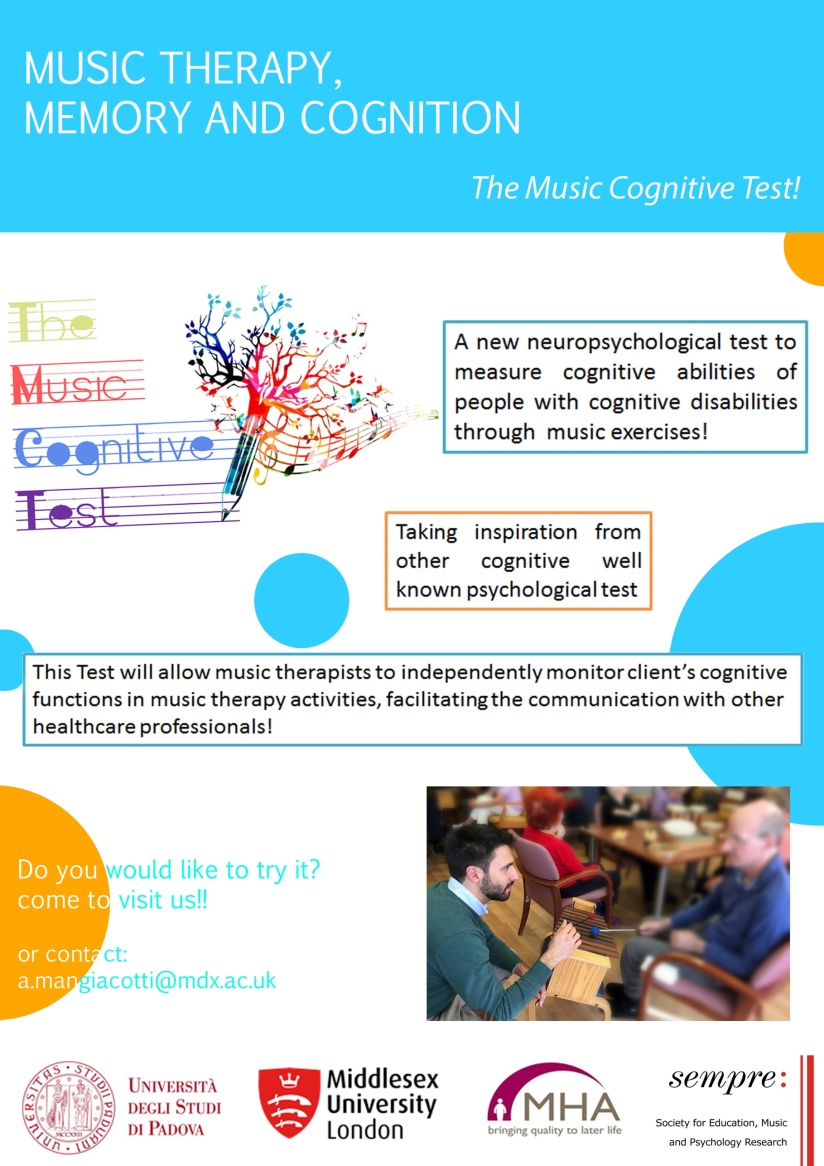